Now You Too Can Make Effortless Profits - Only Takes 15 Minutes a week!

Works for ANYONE - Even if you are 100% New to Accumulator Betting!

Check out our Accumulator Tips Results:

Finally! Accumulators YOU can TRUST...

I used to hate Accumulators.

I assumed they were the sort of bets "mug punters" placed.

It's hard enough beating the bookie with one bet, how the hell would I beat them multiple times??

I had been betting for 19 years and only ever on single bets.

In that time I'd made good profits and just didn't see the point in accumulators and thought it was a joke and a lottery.

I'm cynical by nature, and stubborn.

However after all these years and reviewing my recent accumulator results I have to admit...

As my wife often tells me, I never admit I'm wrong!

So this was a pivotal moment in the way I approached betting. A change that I will adapt for life.

What really made my ears prick up was that I discovered that certain bookmakers would actually give me my money back as a free bet, EVEN if my accumulator lost.

What I also researched was the mathematics of accumulators.

The interesting thing is...

Accumulators can either be your BEST Friend or your WORST Enemy!

The bad accumulators, no doubt the ones you've seen on the popular betting websites are terrible because as soon as you multiple more than 1 bad value bet, you get a stinker of an accumulator.

The good news is with a series of GOOD bets in an accumulator you multiply the value, or edge you have...

Here's a quick example to show you how your edge/profit can be far greater if you choose to bet the EXACT same bets as accumulators rather than singles...

As you can see the profit difference is quite staggering for EXACTLY the same value bets.

We are making 350%+ more on value accumulators than we would with the SAME bets as value singles!

So which would you prefer?

The simple fact is if we beat the odds and get a value price...

Mathematically we Make Greater Profits on Accas than Singles Ever will.

Why is it nigh on impossible to profit on accumulators??

And why do bookies seem to love pushing them??

Like I said accumulators are either very good or very bad. If they are going wrong for you perhaps a few of the following errors have been made...

If you have made any of the above common errors, let me reassure you...

It's NOT your fault.

Beating the bookies is incredibly tough.

Unfortunately with accumulators there are so many ways you can potentially go wrong.

It's hard enough picking one winner, but to set up a successful multiple bet takes serious time and effort. Especially if you want to profit over the long term.

The way the bookies set their odds can also throw off your accumulators. You have to be really careful that you are getting a fair price for your bet, as no edge = no profit.

Also with football being such an emotive game. Of COURSE you have a biased view. Of COURSE you want your favourite team to win, and no doubt its fun to back the teams you love.

However, the bookie isn't interested in this, and they will punish you if you bet with anything other than an objective level head.

To have any chance of success at beating the bookie with accumulators it requires hard work, dedication and skill.

However, For the bookie to beat you its EASY. They simply allow an edge.

Here is a REAL life example of how the bookie very easily makes 8.15% out of punters whatever they bet...

In the above example whether Liverpool win, lose or draw the bookmaker has a 8.15% margin across all the possible bets.

This is due to all the three betting odds adding up to 108.15% probability, rather than the true odds which would equal 100%.

You see the bookie is always one step ahead of you. They already have factored in a 8.15% margin to ensure over the long term they CANT lose.

To have any chance of beating them you have to find your OWN edge.

To help you with this you need someone you can TRUST who will work
out the best bets for you.

Who will show you how to take advantage of bookie offers and increase your edge further.

With AccaTipster I'm going to give you EVERYTHING you need to profit
on football accumulators.

You don't need to worry about calculating edges, sweating over whether you have your numbers right, or any of other boring mathematical stuff I've droned on about (Sorry!)

With AccaTipster EVERYTHING is done for you and I just want 15 minutes of your time per week so you can follow my successes.

This is what you need to do to follow this service...

With AccaTipster things are very straightforward. I send you winning accumulators and YOU make a profit! :)

AccaTipster is perfect whether you are a complete beginner to football accumulators or you are a seasoned pro.

If you are a busy working person, or simply want an easy effortless way to profit on Football, this is the service for YOU.

Here is EXACTLY what you'll get as a member of this awesome football betting club...

34% strike rate, with safety of insurance refunds on certain bets.

Simply follow our tips emails sent direct to your inbox.

Our method has made £710 in free acca insurance bets!

We are only an email away & always happy to help.

Check out the Feedback from our members:

"Get in! What a result. 4 out of 5 accumulators landed. Christmas has come early. I have to admit I was sceptical after last weeks results, it goes to show you need to give a tipster time. Well done Steve."

"Amazing results again Steve. Was chuffed when the final bet on Inter won today to give me just over £200 profit from a £20 stake. This was the icing on the cake after a profitable weekend.

"Being new to accumulator bets I started with small £5 bets and now I'm more confident I'm betting £10. So far so good and have made some good profits this month. I prefer the 5 bet accumulators as the profits are higher.  Thank you so much for helping me."

"Wins have been frequent and my profits are growing. My total profit stands at £2856 and I'm really impressed with the service so far."

See Some of the 100+ Independent 5 Star Reviews left on TipstersReview.co.uk 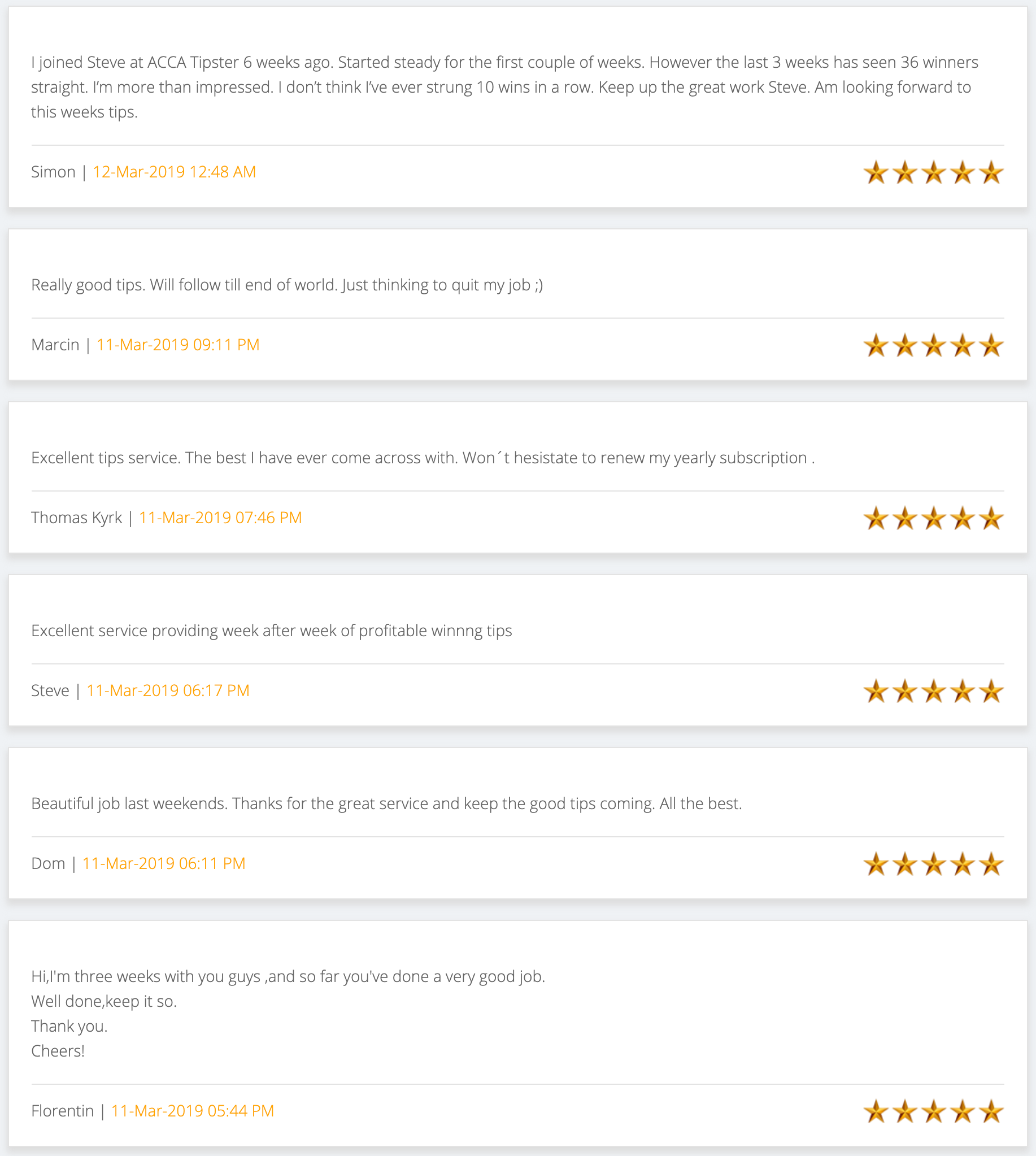 Wait! How Much is this Going to Cost?

The internet is littered with so called "tipsters", mostly rubbish as I'm sure you've found out.

No doubt you've tried the free accumulators the big boys in the betting media seems so keen to push. These are not "free" as you and I both know they more often than not lose you your hard earned cash.

So what I want to do is to be fair and give you a reliable tipster service that
performs well and does not break the bank.

I know my rival tipsters charge around £40-£60 a month for their services...

But you and I both know at small stakes, this simply eats away your margins and means you are hard pressed to make a profit.


I personally wouldn't want to pay a huge amount for a tipster, so why should I make you?

Simply scroll below to view my limited low price offer...

You are fully protected by our 100% Satisfaction-Guarantee.
In the unlikely event that our profitable tips service is not for you
we are happy to refund you 100% with no questions asked.

Get Started Today and Choose Your Option Below...

Payment will rebill on a monthly basis. You May Cancel Anytime.

One Off Payment. No Rebills

Here are answers to some frequently asked questions:

What kind of tips will I receive?

We will send you a selection of  4-folds or 5-fold accumulator bets.

I keep losing with other tipsters why would this be any different?

I prefer to let the results do the talking. Give us a fair risk free trial (paper trade for 30 days) and I think you will be impressed and see that we much better than the average tipster.

Do I have to join loads of bookies for this to work?

No not at all. In the results we do take advantage of accumulator insurance offers. But these are kept out of our monthly profit figures to allow you to use the service if you cannot get to all the offers and still profit.

We deliver tips via email, you will need to follow our sign up instructions to get the emails. If you've signed up and having problems please email us at support@accatipster.com

Why should I pay for Acca Tips?

I personally think the free accumulators you see knocking about on the big popular websites are very dangerous. This is a serious service, we work hard to provide you with the best football accumulators

How much do I need to invest to profit?

This is entirely up to you. I would advise for you to start with small stakes and reinvest profits so you are effectively playing with the bookies cash rather than your own. Please only bet what you can realisitically afford to lose & gamble responsibly.

I don't understand the bets you place, can I still win?

You don't need to know anything about accumulators or football for that matter. We will show you exactly what to bet and its very easy to place the bets at the online bookies.

When will tips be delivered?

We deliver tips on Fridays. During tournaments this will vary, but you will always have tips the day before an event takes place.

Will my bookmaker close my account if I win too much?

This is always a possibility when you have great success. Bookies are a business and they don't like winners. Fortunately there are tons of bookies with new ones opening all the time so it would be hard for you to exhaust them all.

If you're winning so much why would you share your secrets?

Can I bet from my country?

You can bet from anywhere. Remember we do use Acca Betting offers from the UK bookies. This is NOT quoted in our monthly profit figures, but will give a nice bonus to UK bettors.

What leagues do you bet on?

We are Premier League specialist. We also cover the main European leagues and world leagues in the summer. We will also give full coverage of World Cup or Euro Tournaments

Does this involve Matched Betting?

No. While we do encourage you to take betting offers to increase your edge, this is by no means necessary to profit. We do not use matched betting techniques.

Can I cancel at anytime if I'm unhappy with the tips?

Of Course! Simply email me at support@accatipster.com to cancel if you are unhappy with the service.

ClickBank is the retailer of this product. CLICKBANK® is a registered trademark of Click Sales, Inc., a Delaware corporation located at 917 S. Lusk Street, Suite 200, Boise Idaho, 83706, USA and used by permission. ClickBank's role as retailer does not constitute an endorsement, approval or review of this product or any claim, statement or opinion used in promotion of this product. The Thoughts and opinions expressed here are those of the seller(s) alone and do not necessarily reflect the views of Click Sales, Inc., its parents, subsidiaries or affiliates. The products, information, and other content provided by this seller are provided for informational purposes only. In the event of any problem with products that customers purchase through this seller, customers agree that their sole remedy is from the seller, if any, in accordance with any seller warranties and/or seller refund policy. 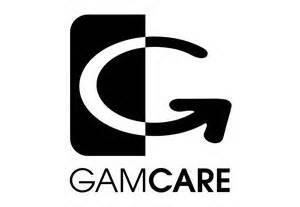